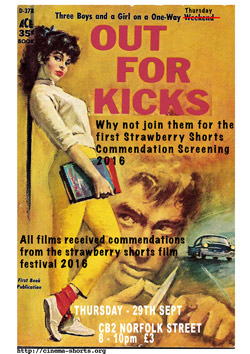 Carlos has a surprise in store for his wife. They had an argument a few days ago and now he wants to apologise.

A young woman enters a crisis on the eve of her 19th birthday as she realizes she is about to out-age her older sister who died at 18.

Columbus, New Mexico is not the last place on earth. It is the end of the road though. This short film explores the history of the place and reflects on the happenings of the surrounding area. Shot on Super 8 and with a GoPro on a couple of different visits.

Business-leader in Corporate Diversity Karen Nightingale introduces her new training programme in Interplanetary Diversity, which aims to prepare its participants for extraterrestrial contact.

Two low-level gangsters from Bradford kidnap a psychic to find out where their dead boss hid the loot. However, their former leader has other ideas and once resurrected he decides to get his revenge on the people that murdered him.

Jim is in love with the ever-changing Catherine, but will her final transformation be too much for him? (A film of the French _Nouvelle Vague_ made fifty-five years too late.)

12-year-old Dyab is a Kurdish Yazidi boy living at Arbat refuge camp, after the horrendous attacks by the Islamic States on their villages at Shingal Mountains (Sinjar). However, Dyab’s dream is, to become a filmmaker and actor and tell the stories and sufferings of his people to the outside world. On the first genocide anniversary, Dyab is planning to present a show, hoping to be seen by the outside world, while he lacks every basic need to produce his project.

Sebastian has to leave his childhood friends behind. The only problem is they don’t want to leave him. Based on true events.