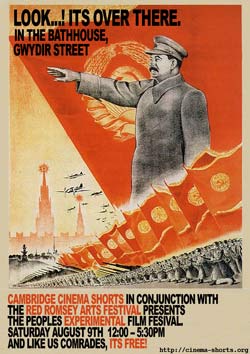 We are a group of people with a passion for Short Films. Based in Cambridge we have been showing both local and international short films at our Strawberry Shorts Film Festival and at a host of other local venues since 2001.

Short films, because of their time and budget restraints, are often honed to the essence of film making, pared down to produce exquisite jewels of the craft, cut and polished until a couple of minutes of no budget short can outshine the latest 3D Hollywood blockbuster.

Every year we receive hundreds of film submissions of every genera. Dramas, animation documentaries experimental, Si Fi and horror which we screen at many venues in and around Cambridge.

Dramas, documentaries and the like are easy to screen but the experimental, (or art films as they are sometimes known) are a different matter and leave us with a problem and a slight feeling of guilt. They really deserve a place in a gallery rather than a cinema so we have a real problem as to where and how to show them. Therefore this festival [The Romsey Arts Festival] offers us a great opportunity to help give them the recognition we feel many of them deserve.

But be warned, they are not easy viewing. Intriguing, enigmatic beautiful, obscure, quirky and just plain odd they need to be watched with an open and excepting mind. Then you may find that some will stick with you far longer than anything you saw on the telly in the past week.

Short Films, in general, are an art form in their own right and we passionately believe that they should be seen and enjoyed for what they are by as wide an audience as we can possibly muster.