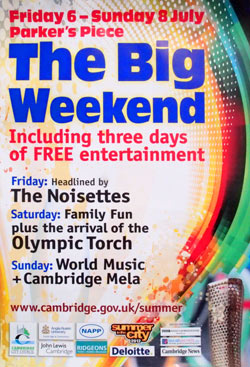 Cambridge Cinema Shorts has been invited by The Cambridge Film Trust, to screen two free family friendly short film programmes as part of The Big Weekend 2012.

Each programme is about an hour long and packed with awesome family friendly films, check out their full running order below.

Our first programme consists of awesome animation from around the world and screens at 15:00 on Saturday 7th July in The Big Screen Cinema marquee on Parker’s Piece.

The second programme again consists of films from around the world but features the work of local filmmakers. The screening is at 13:00 on Sunday 8th July in The Big Screen Cinema marquee on Parker’s Piece.

Animation comes in many forms, from the stop-frame animated plasticine figures of Wallace and Gromit to the cartoons of the Simpsons.

They can require large production budgets and studio facilities or, as some of ours certainly are, can be produced on a kitchen table and filmed with an iphone.

Cambridge Cinema Shorts presents a selection of styles and types which we are sure will amuse and entertain, and we hope may also inspire.

Film Students make them for their degrees, campaigners to push agendas, career minded film makers use them as calling cards, and some people make them because they just love making films.

No three hour Hollywood blockbusters here, but sometimes a five minute, no budget short can stay with you far longer than the latest 3D extravaganza. Small, polished gems, made with love rather than millions, and, with the hope that they may inspire, many in this programme locally made.