A cold looking guitar player, plays the guitar with wet feet and no shirt on. 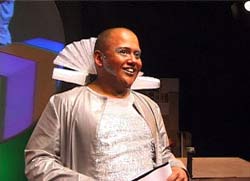 Together will we save the world OR consign it to a black hole dustbin and make a new one?

The fate of planet Earth rests in the hands of four plucky contestants on stage. Using 100% recyclable materials they make the show before our very eyes – buildings, casts of millions, contemporary world events all created with old newspaper and toilet rolls.

An English goes to a French restaurant and finds out that not all French people love the legs of frogs.

Sam is on a quest in a world where enemies are everywhere. His fantasy mission collides with harsh reality when his mother finds herself in danger.

Flight 623 from Berlin is 15 minutes late. Enough time for a young businessman, on the plane, to throw a part of his life into question. At the airport, Joseph Conrad, a tramp with a troubled past, seems obsessed by this mysterious flight. These two men, worlds apart, have nevertheless one thing in common: the final drop that makes the vase overflow.

Throw Me To The Rats

In a Victorian theatre of grotesque, buxom kebab-guzzling ladies peer through opera glasses at the bizarre spectacle unfolding on stage. A chorous line of can can dancers behind a choreographed group of horse heads twirling cocktail umbrellas. Above them a tight rope walker teeters precariously as the audience awaits the main act – an incontinent cat.

This short film, titeld LE(F)T , would like to make us think about partnerships, or about ourselves. What would you do in a disaffected relationship? How do you act in a problematic situation? You attack? Or you freezed? You brave or shy? Are you able to admit at all?

A child’s connection to the World.